There was great excitement in the air as the Sisters in the Kenyan Province made final preparations for our special celebration to remember and give thanks for  50 years RNDM Presence in Kenya.

The first RNDMs to arrive in Kenya were Sr. Cecily Timoney, Bernadine Corcoran, Marian McQuaig and Cecilia McCarthy. In August 1967 they took up residence in a staff house in Machakos Girls School. This would be our first RNDM foundation in Africa. The time of our arrival was very soon after Kenya gained its independence. The first Sisters were reminded that they would be part of the development of the nation which was giving a priority to education for all.

We were delighted to welcome Sr. Josephine Kane Congregation Leader and our own Sr. Lucy Wambui Congregation Team Member from Rome and Sr. Margaret Murphy, Province Leader and two former missionaries, Yvonne Pepper and Catherine Corrigan from the founding province, UK and Ireland.

The Eucharist was celebrated in our Parish Church, Our Lady of Guadalupe. The main celebrant was Bishop David Kamau, auxiliary Bishop of Nairobi. Bishop David is a past student of Queen of Apostles Seminary Ruaraka and paid great tribute to the Sisters who had taught in the Seminary. While a number of the past students are priests in the Diocese he also named past students who have played a very significant role in the development of Kenya in various professional capacities. The Deacon for the day, Joseph Mutuse  is also a past student of the Sisters in Pope Paul VI Seminary Katoloni. He has been a Capuchin Brother for a number of years and will be ordained priest later this year. Bishop David was delighted to meet his former teacher, Sr. Yvonne.  Sr. Yvonne was a founding member in Ruaraka and Karinga.

The celebration was enhanced by the Juan Diego Choir from the Parish and a group of dancers from an outstation in Machakos near our Formation house. They had been organized by our neighbours, Sisters of the Seven Sorrows and were trained by Sr. Miriam. One special part of the Celebration was their interpretation of the responsorial Psalm which was sung by Sr. Miriam.

We were joined by many friends, Sisters from other Congregations and people who had been connected with our Sisters over the years.

The first reading was read by Sr. Catherine Corrigan, who was a founding member of Matuu Mission and later returned to Kenya as Novice Mistress. She was delighted to meet her former Novices who are now the ones carrying on the RNDM mission in Kenya. The second reading was done by Mr. Cosmas Mutuku, a former member of the Kenyan Army, who as a young student was supported by our Sisters and has continued to keep contacts with them.

At the end of the Eucharist there were a number of speeches. Sr. Annuncietta spoke on behalf of the Province. Sr. Margot brought greetings from all the Sisters who had been part of the RNDM Kenya story and the whole Province who continue to support our mission here. Dr. Kivoo Linge spoke as ‘a past student’. He was in the Seminary in Ruaraka when the Sisters first arrived. He paid particular tribute to Sr. M. Paul Behan, telling a story he has long wanted to tell – outlining how Sr. M. Paul was instrumental in introducing pure sciences into the seminaries in Kenya. She laid the foundation for his very successful medical career when she gave him a responsibility in the Seminary Dispensary. Sr. Bernadette, Superior General of the Assumption Sisters of Nairobi, spoke on behalf of the Sisterhoods of Kenya.  Sr. Lucy spoke of her first meeting with the sisters and her experience of living community.

Sr. Felistus Mbisi gave a Vote of Thanks to all who had joined us for the celebration.

At the conclusion of the Eucharist all moved to our compound for a meal. There was much ‘remembering’ of Sisters by name among the table conversations.

The highlight of the day was the Unveiling of an Honour Board by Bishop David and Sr. Annuncietta. It lists all those who were formerly part of the RNDM Mission in Kenya stating the years they were present and where they worked. There were 56 sisters from the founding province. Some stayed a short time. Some returned for a second experience and some stayed many years. There were also sisters from New Zealand, Australia, India, Bangladesh, Myanmar, Vietnam and Canada. There was also a moment to remember in a special way Sr. M. Francis Xavier Gibbons, missionary in Myanmar and Kenya whose body rests in St. Austin’s Cemetery in Nairobi. How fitting it was that as we remembered her in Nairobi  the sisters in Myanmar were opening the primary school in Pyay, our first primary school since M. Francis (Methodist and RNDM Missionary in Myanmar) was expelled with her companions in 1966.

A Souvenir Booklet which briefly mentions the contribution made to education, health and development contains a list of the Sisters who came to Kenya for part of their Formation or Study as well as the list of those currently present in Kenya.

As in all Kenyan celebrations there was the Cutting of the Cake which bore the inscription:

The celebrations were continued with a Thanksgiving Eucharist organized by the Women in the Muuo Project in Machakos and with our visitors visiting our communities and seeing a little of the current ministries. We thank all who were with us in spirit and through special messages.

The story of the fifty years has been captured by Sr. Salota in a Power Point presentation.

Celebrations will continue in the founding Province in November. 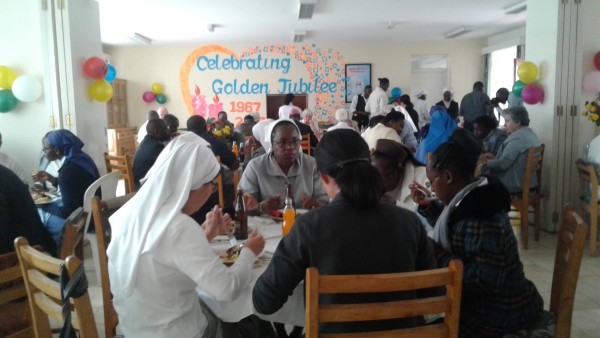 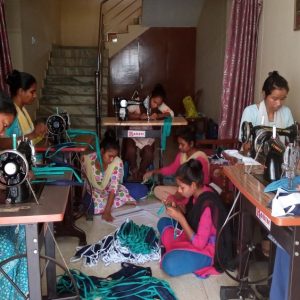